Genetic and environmental regulation of neurogenesis in the olfactory and neuroendocrine system of zebrafish (Danio rerio).

Originally the olfactory sensory system was proposed to be a source of the neuroendocrine Gonadotropin Releasing-Hormone (GnRH) cells essential for puberty. In humans, the loss of endocrine GnRH cells results in developmental defects including the lack of initiation of puberty and infertility. We have used genetic, molecular and imaging techniques to show that the endocrine GnRH cells arise from regions outside the olfactory sensory system, and that the adult hypothalamus has the ability to generate new GnRH cells thus opening the door to therapeutic treatment of human disease. The cranial neural crest cells (green) forming the structure elements and glia of the olfactory sensory system, are sensitive to alcohol which affects the migration of the precursors. Defects iin cell migration results in phenotypres similar to those observed in human fetal alcohol syndrome (Boric et. al. in peparation). We have demonstrated that zebrafish can make and retain olfactory memories of odors experienced as juveniles, and this odor exposure results in changes in gene expression in particular the otx2. Recently we have shown that ORs containing putative otx2-binding sites can be differentially regulated in response to odors (Calfun & Whitlock, in preparation). 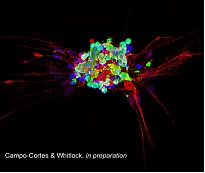