During the last 20 years, computational techniques have become an indispensable tool for the understanding of chemical processes at the nanoscale level, which, even though the huge advancements in the manipulation of matter at the molecular level (e.g. single-molecule techniques), in general remains hardly accessible by traditional experimental means. The popularity and acceptance of Molecular Simulation as a well established fi eld, is thanks to its contributions in physics, chemistry, biology between others, expanding the knowledge on the aforementioned fields and, in practice, bridging the gap between “pure theory” and the empirical world. Its rapid development, thanks to the interdisciplinary combined efforts of chemists, physicists and computational scientists has triggered the generation of novel algorithms, new software and faster computational resources, rendering molecular simulation a widespread technique easy accessible to wider audiences. Among the great many methodologies belonging to this field, Molecular Dynamics is widely used for the study and characterization of molecules at an atomic resolution. MD deals with the numerical solution of the N -body problem for atomic and molecular systems, elegantly combining statical mechanics and classical physics through the time-dependent integration of Newtons equations of motion. These equations, even in the simplest systems, are of such complexity that the integration must be done with numerical methods over a huge quantity of discrete time-steps, instead of being performed in an analytical, continuous fashion. For atomistic simulations, the magnitude of these time steps is in the range of femtoseconds (fs ). At each time-step, the coordinates are used to calculate the potential energy of the system (V ) and the negative rst derivative (with respect to the position of each atom), the force, using a molecular mechanics force field (FF). A long series of these calculations allows for the generation of a trajectory through phase space, 6N dimensional space (where N is the total number of atoms of the system), defined by the three atomic spatial position and velocity arrays, as representative of a statistical mechanical ensemble of microstates.

MD is very versatile technique, thus as a group focused on MD we are interested in broad and interdisciplinary range of topic; among such are: 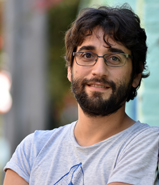