In voltage dependent channels, the electrical expression of their function is the ionic current which can be studied at the macroscopic level (the ionic current) and at the microscopic level (the single channel recording). But in addition to the ionic current, in these molecules the rearrangement of internal dipoles and charged groups under the influence of the external electric field produce gating currents. These currents are a direct expression of molecular rearrangements relevant to the operation (or gating) of the channel molecule.

With the advent of molecular cloning techniques, we have been able to carry out these studies with a detail not possible before by recording gating currents of cloned Shaker K+ and Sodium channels and describing their electrical properties with high resolution. Thus, we can modify the molecule to probe the role of specific amino acids in the voltage dependence and charge movement of the channel.

The main interest in the lab is the search for the dynamics of the molecular correlates of the function in membrane transport proteins. This is being approached with physical techniques such as temperature effects and complex capacitance measurements in the frequency domain combined with mutations of the molecule and assessed by gating currents, macroscopic currents and single molecule recordings. The correlation with structural changes are being monitored with optical techniques using real time fluorescence spectroscopy including lifetimes, changes in intensity and fluorescence resonance energy transfer from probes attached to strategic sites in the molecule of interest while being functional in the membrane. 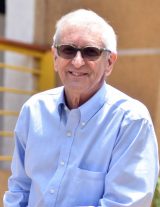